Only six kilometres from the CBD, this lively suburb has been one of Newcastle’s fastest-growing markets in the past decade

Waratah is the perfect mix of urban and suburban living described by locals as being “ten minutes from everything.” Located in Newcastle’s northwest, Waratah is perfect for first-home buyers and growing families looking for affordable homes in Newcastle.

Waratah has a long and storied history dating back to the early 19th century, starting out as an industrial suburb for coal miners and brickmakers in the area. Today, Waratah is a safe, welcoming suburb conveniently placed near local amenities like the Calvary Mater Hospital and the University of Newcastle.

House prices have been climbing in Waratah since 2019 with properties experiencing capital gains of 32.02% over the past year and 57.1% over the past five years. Waratah’s diverse population includes families with kids, professionals, singles, students and retirees, most of whom are looking for long-term residences.

48.8% owned outright or with a mortgage

With local parks, schools, medical services, convenient public transport and plenty of shopping opportunities, Waratah has become one of Newcastle’s central suburban hubs. Properties in Waratah are a mix of traditional cottages and stylish, renovated homes. Savvy investors are looking at Waratah real estate for knockdown rebuilds and investment properties thanks to its desirable location and affordable cost of living. Read on to learn more about living in Waratah NSW.
Schools
Parks & facilities
Public Transport
Demographics
Schools

Waratah is popular among new and established families for its proximity to a wide range of public, private and Catholic schools.

Waratah features plenty of small-town suburban pleasures like parks, sports grounds and pubs, making it a great choice for anyone looking for a fun community with convenient amenities.

With a time-restricted off-leash area for dogs and sheltered picnic tables, Braye Park on Clarence Road is a picturesque locale for active families and singles in the area. The Thomas Percy Oval in Waratah West is great for a game of cricket and also includes a playground for the kids.

The heritage-listed Waratah Park on Young Street features a playground and open-grass area. Waratah Park was also used as a central filming location for the iconic Australian series Skippy the Bush Kangaroo from 1967 to 1969.

For shopping, the historic Waratah Village on Turton Road was built on the same site as one of the region’s main brickyards that operated from 1886 to 1969. The shopping hub features a bronze sculptor memorialising the old brickworks and now, Waratah Village offers convenient access to supermarkets, a post office, bakeries, chemists and large retailers like Kmart.

Waratah is also home to several local pubs and social clubs like The Royal Inn and Town Hall Hotel — the latter of which has been in business since 1866. The nearby Wests Mayfield features fresh food, a bar, dining and entertainment rooms as well as a gym.

Medical services in Waratah include the Calvary Mater Hospital on Edith and Platt Street and the John Hunter Hospital in the nearby suburb of New Lambton Heights.

Waratah’s proximity to the Newcastle CBD brings excellent public transport to the area. Bus timetables are flexible with frequent, convenient stops and rideshare apps like Uber are easy to use thanks to Waratah’s position near high-traffic areas.

The suburb is popular among student renters as its public transport options travel straight to the University of Newcastle campuses in Callaghan and the CBD.

Located on the main northern line, Waratah Train Station in Mayfield provides easy access to the Newcastle Interchange for day trips to Sydney or the Central Coast.

With a median age of 39, Waratah is a diverse suburb that is made up of young and established families, professionals, singles and retirees. Top professions in Waratah include technicians and trade workers, community and personal service workers, professionals and clerical administrators. 85.4% of the Waratah population are employed in either full time or part-time work.

Waratah NSW real estate properties are primarily separate dwellings with only 18.0% of homes being semi-detached/townhouses and 19.2% being units and flats. Renters make up 46.6% of the Waratah population, making it a prime opportunity for investors looking for rental properties in Newcastle.

Searching for your next home? Take a look at houses for sale in Waratah, Newcastle NSW. 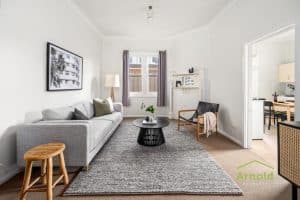 A great entry point into the market, or ideal investment

With its convenient location and local amenities, houses for rent in Waratah NSW are popular among young families, students and singles.

Nothing found, please check back later.

Houses for sale in Waratah, Newcastle NSW spend an average of 37 days on the market. Browse recently sold properties in and around the area.

Nothing found, please check back later.

Newcastle’s real estate is booming with Waratah quickly becoming an in-demand suburb. Our team of Waratah real estate agents know how to get you on the property ladder — and fast.

With over 30 years of experience in the region, our family-owned business knows Newcastle better than any other firm. We’re committed to getting the best results for all our clients with our properties spending an average of only 48 days on the market. With our advanced database of buyers, local agency connections and extensive advertising experience, we’ll get the best possible return for your property.

We have some of Newcastle’s most diverse suburbs under our belt so we know what people are looking for when buying or renting Waratah real estate in NSW. Our modern software and comprehensive vetting make it easy to find suitable tenants for your property. Plus, we use major advertising platforms including Domain, Rentfind and more to make your property shine.

Book an obligation-free rental appraisal and get the ball rolling today.